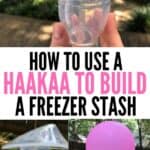 If you’ve ever nursed a baby, you know as soon as your baby latches and your milk starts flowing, it’s probably flowing on both sides. And unless you’re tandem nursing twins, that’s a whole lotta wasted liquid gold!

The haaka pump is designed to solve every mama’s nightmare of wasted milk with an easy to use, inexpensive, hands-free milk catcher.

If you’re breastfeeding and you haven’t tried the haakka– run, don’t walk, to get your hands on one of these amazing milk-saving miracles!

If you’re a breastfeeding mom, the haaka pump is a total game changer!

What is a haakaa?

The haaka breast pump is a hands-free device that’s designed to work primarily as a milk catcher. While you’re nursing your baby on one side, chances are, the opposite breast will begin to leak. To avoid wasting precious amounts of milk, the hakkaa works by collecting milk from the other “leaky” breast while your baby nurses on the other.

The haakaa pump is made of 100% food-grade silicone and is dishwasher safe! Unlike an electric breast pump, the hakka has no small parts and doesn’t require electricity– so you can pump on the go. It’s basically a breastfeeding game-changer!

Benefits of a haaka pump

How to use the haakaa breast pump

First, you’ll need to sterilize your haakaa, and you can do so by placing in boiling water for 3-5 minutes of by placing in the dishwasher and choosing the sanitize wash cycle.

Step 2: Fold over the flange

Next, you’ll fold the flange down. This is the secret step! Folding over the flange creates an ultra-strong suction.

Step 3: Create a suction by squeezing the haakaa

Next you’ll want to squeeze the haakaa from the base to initiate a suction.

To create the suction you’ll fold over the flange next. You milk should soon begin to flow after the suction is created. You do not need to hold on to the pump, but if you feel like the pump is falling off, simply take off and reposition and create a new suction.

How to use a haaka while nursing

To use a haakaa pump while breastfeeding your baby you’ll want to follow these simple steps:

Is the haakaa hands free?

The hakka is completely hands free and can be used while nursing your baby at the same time with no issues whatsoever.

Once the hakkaa is properly placed on your breast, you shouldn’t have issues with it staying on, as the suction is pretty powerful. If you feel like the hakka breast pump is having a hard time staying in place, simple release the suction and try again.

Some nursing moms that are using the haakkaa as a milk saver find that once their baby gets a bit bigger and starts kicking and moving around a lot while nursing, they need to wear a hands-free pumping bra to ensure their haakaa stays in place while they nurse.

What if my baby kicks off the haakaa?

Try different breastfeeding positions to solve this one. Using a football hold where your baby’s legs are positioned under your arm is usually the answer to keeping the haakaa on with a fidgety baby.

What if my baby nurses on both sides, can I still use the haakaa?

Absolutely! The haakaa is a milk catcher by nature and is designed to catch the letdown you experience while baby nurses. If you’re concerned about baby not getting enough milk from the breast your haakaa is on initially, just remove the haakaa once you’ve collected the milk from your let down.

Once your baby switches sides, she’ll be able to get another let down from your other breast, so you should not worry about the haakaa draining all of the milk from your breast.

Does the haakaa only collect foremilk?

If you leave your haakaa on long enough, it will collect both foremilk and hindmilk.

Because foremilk is the milk that flows immediately upon feeding, while hindmilk comes towards the end of nursing session, it stands to reason that if you simply use the haakaa as a milk saver you cannot expect to collect hindmilk.

Can you use haakaa to pump when you’re not feeding your baby?

While a haakaa pump is certainly much more convenient than an electric breast pump, I didn’t find that it was a replacement for my electric pump.

I loved using my haaka as a milk saver to catch milk that was leaking from the breast my baby wasn’t feeding on, or to relieve engorgement in the middle of the night without having to drag out my pump and wake everyone up.

But when I pumped at work during the times my baby would typically be feeding, the haakaa just wasn’t as powerful enough as an electric pump. So if you plan to pump at work or while a partner feeds your baby, a haakaa breast pump probably won’t do the job as good as an electric breast pump.

How many ounces can you expect to pump using a haakaa breast pump?

Since your milk supply is going to be different than any other mom’s supply it’s hard to give a good estimate as to what you might expect to collect using a haaka. It seems like the normal amount you can expect to pump using a haaka is anywhere from 1-2 ounces per nursing session.

Because the haakaa is designed as a milk catcher you can’t expect to pump as much milk with a haakaa as you would with an electric or even a manual breast pump.

The beauty of the haakaa is the fact that you’re collecting milk that would otherwise be leaking onto your shirt or a pad and are able to build a breastmilk freezer stash completely effortlessly!

Just think about it, on average your baby likely nurses 7 to 9 times a day. Even if you only collect 1 ounce every session, you’re collecting 7 to 9 ounces each day. In just one month, you could easily have well over 200 ounces breast milk sitting in your freezer!

Related: Amazing breastfeeding hacks I learned from my lactation consultant

What if I’m not getting any milk using a Haakaa breast pump?

Outside of attaching the haakaa milk saver to the breast opposite baby is nursing on, some women report having a hard time collecting milk when they use the pump when baby isn’t present. If this is an issue you’re experiencing, you may try some of the following suggestions:

First, make sure you have a good suction. Remember to try folding down the flange of your haakaa and then attaching to your breast for best results.

Second, you may need to massage your breast to help encourage milk flow.

Additionally, you can try looking at photos or videos of your baby while you’re using the haakaa breast pump to try and encourage let down.

Lastly, leaving the haakaa on for about 15 minutes and allowing your body to relax should also help, as the more anxious you are, the harder it is to letdown.

How do you sterilize the Haakaa?

Each time you use the hakkaa milk collector you should sterilize it. A great advantage to the haaka vs an electric pump is that sterilization is a breeze. You only have to deal with one part, rather than a handful of small parts and tubing that need to be disinfected each time.

To properly sterilize the haaka pump you can pop it into boiling water for 3 to 5 minutes, or because the haakaa is dishwasher safe, you can choose to clean it in the dishwasher on the sterilize setting.

Any harsh chemicals like bleach will cause the silicone to break down over time, so make sure to just use a gentle cleaner.

If your haakaa gets cloudy, try a vinegar and water solution (1 part vinegar to 1 part water) to try clearing it up.

What if my haakaa won’t stay on?

After you sterilize the haakaa make sure it’s completely dry–you might even wipe it with a clean towel before you try to use it– as any moisture will completely ruin your seal.

If you haven’t already try folding down the flange first when inserting the haakaa breast pump on your breast. This makes it so much easier to get a good suction.

To make sure you’re getting a good suction. See the photos above to ensure you’re placing the haakaa on your breast correctly. Make sure to squeeze the haakkaa breast pump at the base, not the sides or top, for the strongest suction.

What’s the difference between haakaa and haakaa gen 3?

If you’re researching the haakaa pump, you’ve likely come across info about the Haakaa gen 3, too. The products work fairly similarly, but there are some stark contrasts between the two:

Will the hakkaa pump work for all breast sizes?

Unlike an electric pump that has several different flange sizes available, the haakaa is one-size-fits all. Because of the powerful suction and lightweight size of the haakaa the one size should not be a problem for most women. I’m personally on the smaller side, and didn’t have an issue with the haakaa staying in place.

Does the haakaa cause an oversupply of milk?

I’ve spent enough time with my lactation consultant to understand that breastfeeding is a supply and demand thing. So essentially, when milk is removed from your breast it signals to your body to make more.

But if you’re using the haakaa for its intended use–strictly as a milk saver– your supply shouldn’t be affected too much. The reason being, when you nurse your baby the letdown reflex (milk ejection reflex) is triggered and milk flows out of your breasts– and not just out of the breast your baby is nursing on, either!

By using the haakaa to simply catch the milk that would otherwise be leaking into a breast pad, you won’t be altering your supply too much.

However, I did notice that in my experience, even though the haakaa pump is not a true breast pump, it can pull out more milk than a traditional milk saver that doesn’t have a suction feature.

I suggest only using the haakaa to catch your let down if you are concerned or notice an oversupply issue.

Additionally, it is a known fact that you can cause an oversupply if you pump before your milk supply is regulated, which typically happens within 3 to 4 weeks. Given this information, you might wait to use the haakaa pump until that point.

As if the haakkaa couldn’t get any better, did you know you can also use it to help remove clogged ducts?

To clear a clogged duct with epsom salt just fill up your haakaa pump with a mixture of water and epsom salt at attach to the affected breast. Because epsom salt is a natural anti inflammatory agent, this trick works perfectly to clear up a clogged duct.

What to eat to increase milk supply

How to build up milk supply fast

How to lose weight while breastfeeding without affecting milk supply