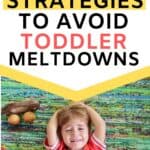 There’s no question– your toddler’s favorite word is no.

No is their favorite word because they’re obsessed with exerting their own will. Whereas before when they were a cuddly, little baby, they went along with whatever, now that they’re a toddler, they have thoughts about how everything should be.

Armed with this new fun entitlement, your toddler’s behavior can quickly get out of control the moment they don’t want to do something you ask them to.

Sometimes they even have epic toddler meltdowns, too–leaving you frazzled and out of ideas.

So how do you cope with your toddler’s meltdowns and tantrums without feeling overwhelmed and upset every single day?

As a mom of a highly opinionated toddler, I’ve developed some strategies that have really been working well and I’d love to share them with you in hopes of curbing your toddler’s meltdowns, too!

Strategies to avoid toddler meltdowns before they happen

Here’s a scenario: Your toddler decides they’d like to wear shorts and it’s 30 degrees outside. You rush in, declare loudly that they can’t wear shorts since it’s freezing outside and tell them to hurry up because it’s time to go.

Next time you encounter something like this try acknowledging how they’re feeling first.

Say things like: “You really love shorts, huh? Shorts make it easy to run, jump and play, don’t they?”

Or, “I know you love picking out your clothes for school and it’s probably pretty frustrating when I come in and tell you you can’t wear what you picked out.”

Or “Oh wow, you picked out a really great outfit, I love the dinosaur on your shirt!”

This crucial step of acknowledgement of your toddlers feelings is such a game changer and it’s echoed in many beloved parenting books of mine.

But the technique to use next comes from one of my favorite books, How to talk so little kids will listen.

Instead of following up your acknowledgement statement with a but…follow it up by saying, “the problem is…”

So using the example above, you can say “Oh wow, you picked out a really great outfit, I love the dinosaur on your shirt. The problem is, it’s really cold outside and I know you’ll want to go outside and play with your friends later and you won’t want to be cold.”

So you’ve acknowledged your child, making them feel heard and empowered and you’ve followed it up a problem that you can solve with your child.

If acknowledging your toddler’s problem doesn’t work, try kicking it up a notch and really over-exaggerate your response. Match their emotions when you acknowledge what they’re going through.

No, you don’t have to break down in tears, but be big with your emotions, too!

Strategy #2: Give a choice

Turns out toddlers are just like adults– they hate being told what to do.

Rather than having a fight ensue every time you want your toddler to do something, why don’t you consider giving them a choice?

You’ll be amazed at how motivated toddlers are to make their own decisions in the form of accepting one of your choices.

Yes, it may totally feel exhausting to give your toddler options rather than just tell them what to do, but you know what’s more exhausting?

Constantly fighting with your toddler.

In the event your toddler shouts “no!” to either one of your choices, you can then move on to exploring other options with them.

When your toddler starts coloring on your walls and you tell them they can color on construction paper or on a notepad, only to be met with a resounding “NO!” from your tot, it’s time to get creative.

We could color on the sidewalk with chalk or you can color on this paper plate, etc. Usually this gets their mind going and they’ve all but forgotten they wanted to draw all over your walls.

If you have a really headstrong toddler alter the strategy to giving ultimatums in the form of choices.

For example, say: “Here are your choices: You can put your shoes on right now so we can go to the park or you can stay home.”

Or “You can color on your paper only or I can put your crayons up.”

One of the biggest reasons my toddler has meltdowns is because she doesn’t like stopping what she’s doing to do something else that I request of her.

I started reading about ways to cope with this conundrum because it was happening literally all day long and probably the source of most of her meltdowns.

I found really great advice that I’ve been using and it works most of the time; here it is:

Cue your child for what’s coming next. But remember, you toddler can’t tell time, so don’t say “we’re leaving in 15 minutes,” but rather “after you finish this puzzle we have to leave.”

Follow this up with getting them excited for what’s to come next. “After you finish this puzzle we have to leave, and we’re going to run errands and you can listen to whatever music you’d like in the car!”

Toddlers frequently want to do only what they want do. It’s just basically how they operate.

By distracting them with humor or stories, they seem to move past whatever hangup they had about not doing something you’d like them to do.

I’ll use the getting dressed and getting out the door example again because that’s when my toddler loves to have meltdowns. It’s so much easier to distract her with a story or humor than to fight with her.

For example, she loves trains, so sometimes I’ll say: “Let’s get dressed and put our shoes on so we can go and then we’ll go look for train. We’ll see how many we can find and what colors they are!”

We live relatively close to train tracks so this works for us, by the way, but what can you use that appeals to your child and distracts them enough to do what you’d like them to do?

Stories are fun too. You can make up characters and pick up in the story where you left off last time. So say “Let’s get ready to go and when we get in the car I can tell you about what happens next with so and so.”

Humor is easy too because toddlers love to be silly. It doesn’t matter if it doesn’t make sense, just go with it and make it silly!

Strategy #5: Offer consequences and follow through when you can’t avoid a toddler meltdown

Probably 8 or 9 times out of 10 I can use one of the first four strategies to help my daughter obey without it leading to a meltdown. But sometimes they’re just not having it. And that’s totally okay.

That doesn’t mean you’ve failed as a parent.

The truth is, sometimes toddlers just aren’t going to comply.

The best thing to do when the above strategies don’t work is to clearly and concisely  let them know what the consequence is and follow through when they don’t comply.

If you don’t’ follow through they’ll see right through you and I promise, the meltdowns and tantrums will only escalate.

Final thoughts on strategies to avoid toddler meltdowns before they happen

Toddlers are little people who are just learning how the world works, they want to stop and smell the roses and explore everything.

They’re serious about play and don’t want to be removed from an environment that’s fun.

It is true, these strategies do take longer to execute than simply commanding your child to do something.

I’ll close with a quote from How to Talk So Little Kids Will Listen that really brings everything home: “Study after study has found that young children who are not constantly ordered around are much more likely to cooperate with simple requests from a parent than children who are micromanaged and controlled most of the time.”

And based on my personal experience with my toddler, I couldn’t agree more!

How to transition from crib to toddler bed without tears

No stress meal ideas for toddlers