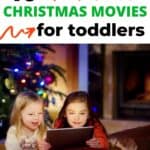 Christmas time for toddlers is magical– they’re finally old enough to get excited about the season and they’re filled with excitement over all of the new and fun things the holiday brings.

I don’t know about you but I love watching my favorite movies each Christmas and now that my daughter’s old enough, I’m so excited about this amazing list of Christmas movies for toddlers.

Looking for the best Christmas movie for your toddler? Here are my top picks!

10 of the best Christmas movies for toddlers

Let’s kick this list of great Christmas movies for toddlers off with a classic– Rudolph the Red Nose Reindeer. There’s nothing better than introducing your kid to amazing holiday movies you grew up watching and Rudolph is simply a must!

Another great holiday movie for toddlers! If you’re lucky enough, once you’re finished with this film maybe you can get outside with your toddler and make a snowman! Or, if snow isn’t in your future, top off the movie with these snowman Christmas crafts.

How the Grinch Stole Christmas

How the Grinch Stole Christmas is a widely popular holiday film and a great movie for families. Younger toddlers might think the Grinch is a bit scary, so just use your best judgement.

This Christmas flick is about a little boy who starts to doubt Santa Claus, but later finds a train heading to the North Pole and hitches a ride. If you haven’t introduced your toddler to this timeless classic, now’s the time!

Can you even wrap up a Christmas season without viewing a Charlie Brown Christmas? This little film is delightful and highlights the real meaning of the season, prompting those good conversations you can have with your kids. I grew up watching this each year and was excited to introduce it to my toddler, too!

Remember watching Air Bud as a kid and bawling your eyes out? Santa Paws is part of the Air Bud franchise and although it hasn’t been around for decades like a lot of other Christmas movies on this list, it’s quickly becoming one of the best Christmas movies for toddlers!

If your toddler is a fan of the Elf on the Shelf doll, they’ll love the movie, An Elf Story. This endearing Christmas film is about a little elf named Chippey who has been sent by Santa to help a little boy believe in Christmas.

Related: Elf on the shelf ideas for toddlers that you can easily pull off!

If you’re a fan of A Christmas Carol, you’ll love introducing your toddler to the kids version, Mickey’s Christmas Carol. This version is much less scary than the adult version and kids and toddlers alike will love this Christmas movie.

We’re pretty big Curious George fans in our household so I knew this movie had to be on the watch list for Christmas. This is a cute film about George and his side-kick the Man in the Yellow Hat trying to decide what to get each other for Christmas.

I love that it reminds kids that Christmas is more than just receiving, but also about giving. The sweet message and lovable characters make this flick one of the best Christmas movies for toddlers.

If you’ve go a Sesame Street fan or Elmo lover in your house, Elmo’s Christmas Countdown is the perfect Christmas movie for your toddler!

Where can I watch these Christmas movies for toddlers?

If you have the Prime Video App on your TV you can rent or buy most of these Christmas movies.

A Charlie Brown Christmas movie airs on Television each year in early December.

Good news for those of us that don’t like to wrack up tons of money in video rental charges, Freeform’s 25 Days of Christmas is airing some great Christmas movies for toddlers this year!

The official schedule hasn’t been released for 2019 yet, but they have announced Frosty the Snowman, How the Grinch Stole Christmas, and Rudolph the Red Nose reindeer will all be aired! (If you don’t have cable, you can watch Freeform on Hulu)

Netflix has a ton Christmas movies for toddlers including Santa Buddies, and other popular holiday films not on this list like, Santa Claws, Holiday Classics (featuring characters from Shrek and Madagascar), Kung Fu Panda Holiday, and Mickey’s Magical Christmas.

« Diastasis recti: how to fix the problem through exercise
How to get a toddler to eat vegetables without losing your mind »