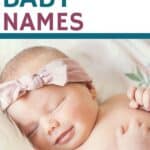 Is there anything that rolls off the tongue easier than a sweet southern baby name?

Pretty southern girl names like Annabelle, Harper, and Georgia and Southern boy names like Beau and Brooks are timeless and never seem to get old.

And of course, we can’t forget the Southern double names like Mary Catherine, Sarah Charlotte and Beau Alexander — all beautiful southern baby names that have been passed down for generations.

Struggling to find the perfect baby name? Here are 100+ timeless southern baby names to choose from.

Travis: English origin, meaning crossroads or crossing.
Tennessee: Native American origin, meaning “river of the great bend.” Once thought of as a girls’ name, Celebrities like Reese Witherspoon have used this popular southern name for a boy, as well.

Have you registered for your baby yet? Check out my list of 20 baby must haves!

As with any name, make sure you and your partner can agree on the name completely. Compromises with names tend to not work out so well, so keep searching until you can both fall in love with a name.

If you’re feeling a little less than enthused after searching through hundreds of potential southern baby names perhaps choose a family name, last name or a name of significance to you or your spouse.

Make sure you always spell out initials before deciding on a first and middle name, so as not to run into any hilarious moments when you decide to monogram something for the first time. It’s also best to go with a common spelling of your name so that your child isn’t constantly spelling his or her name for everyone.

Once you’ve decided on a southern baby name that fits your style it’s a good idea to have a conversation with your partner as to whether or not you’ll decide to share your baby’s name prior to their arrival.

Choosing to keep a name private until your baby’s birth means you likely won’t have to deal with any negative feedback about your name choice–causing you to change your mind!