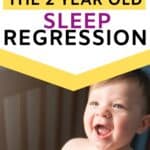 Babies and toddlers are no strangers to sleep regressions. Just when you think you’ve got it all figured out, bam– it’s time for another sleep disturbance.

But here’s some good news: by the time your child hits the dreaded 2 year old sleep regression, this is likely the last major sleep hurdle they’ll experience.

The 2 year old sleep regression happens because your child is at a particular point in their growth and development, which affects the way the sleep.

One of the biggest reasons your 2 year old now has sleep problems stems from the fact that they’re not getting enough day and night time sleep.

At 2 many toddlers are now more aware of the world around them and may be suffering from a bit of FOMO (fear of missing out). In a nutshell, they fight naps and sleep because they want to keep playing and interacting with you.

Other reasons your child might suffer from sleep problems at age 2:

In addition to an inconsistent schedule causing the 2 year sleep regression, here’s some other reasons your toddler might have sleep problems:

How long does the 2 year old sleep regression last?

Unfortunately for parents, there’s no hard and fast rule for how long the 2 year old sleep regression lasts. Most children will bounce back quickly; especially if parents work quickly to figure out the root cause of the sleep problem and get their toddler on a consistent schedule. Most likely, your tot will move past the sleep regression within a few weeks.

How to move past the 2 year sleep regression

Correcting your toddler’s schedule to make sure he’s getting the appropriate amount of day and night time sleep is the biggest and best thing you can do to help your toddler overcome a sleep regression.

By the time your toddler is 2, she needs between 11 and 12 hours of night sleep and one nap during the day.

You also want to make sure your toddler is going to bed between 6:30-8:00 pm each night, as this is the time their bodies are designed to go to sleep at night and keeping them up past this time is going to cause major sleep issues in the form of waking up several times during the night or waking up too early.

Two year olds will nap anywhere from 1-3 hours, but if you’ve got a toddler who really enjoys naps and is sleeping past 4:30 pm, you want to wake your toddler, as sleeping too late in the day will interfere with bedtime.

If you sleep trained your child as a baby, you likely are familiar with the power of a consistent bed-time routine.

At age 2 your toddler is more active than ever before, they’re likely spending much of their day exploring new places, having playdates, running errands with mom or even attending pre-school.

All of this excitement makes it hard to wind down, and you may find that your 2 year old just won’t go to sleep.

Establishing a consistent bedtime routine helps to signal to your toddler that it’s time to sleep. All screens should be shut off two hours before bedtime as well, so that their brain can mentally start to shut down.

A simple routine like bath, books/songs, pajamas and cuddling/rocking works wonders. Once you are finished with bath and make your way into your two year old’s room, try to stay in the room. Bringing them back to the living room or to an area where their toys are is likely to wake them up some, making it that much harder to go to sleep.

Once your child reaches the age of 2 it can be so tempting to get rid of a daily schedule in favor of running errands or attending events. Doing so, is potentially disastrous– did you know that the majority of toddlers who give up their nap too early do so because it isn’t offered consistently enough? Map out a routine that works for your toddler and stick to it.

Why is my 2 year old waking up so early?

Like I covered above, the 2 year old sleep regression comes in many forms, and some parents experience this sleep disturbance in toddlers when they notice their toddler is waking up around 5 am each morning.

If your 2 year old  is waking up too early check on their daily schedule. The biggest reason this happens, besides the sleep regression, is largely due to the fact that they’re going to bed too late. A toddler who goes to bed late will not sleep later; it doesn’t work that way at all. They’ll actually be over tired if they get into bed later than 8:00 p.m., which causes them to wake very early.

Sometimes, your toddler is napping adequately during the day, and is going to bed before 8:00, but they still wake up around 4 or 5 am. If nothing should be tweaked in your schedule the best course of action is to wait it out.

Do not be tempted to go in and get your toddler and start your day at 5 am. You’ll be exhausted, and they will too. Unless they are crying, let them be. They might even fall back asleep on their own.

Keep in mind that if you stick to a consistent sleep and nap schedule, this will work itself out on its own in a week or so. If you go in and get your toddler at 5 am, pretty soon their body clock will start waking them up naturally at this time.

Why is my two year old waking throughout the night?

At 2, many kids start to feel scared at night and as a result, have nightmares or even night terrors– which leads to them waking throughout the night. Additionally, 2 year olds might be dealing with some separation anxiety which also leads to sleep problems.

The best thing you can do if your child is waking throughout the night is to allow them to self-soothe first. If allowing your toddler to self soothe didn’t work, go in with a calm demeanor and gently rub their back until they calm down. Don’t offer for your little one to climb in bed with you, as this will quickly become a pattern, only leading to more sleep issues.

If your 2 year old is refusing naps, you’re not alone- toddlers love to start skipping naps around age 2. Many parents take this as a sign that their 2 year old is done napping and eliminate naps altogether.

Would you be surprised to learn that despite your toddler’s behavior, naps are crucial for toddlers until at least age 3? On average, toddlers naturally drop naps completely between age 3 or 4, but some kids will still require a quick power nap until age 5!

Here’s the thing, just because your toddler doesn’t want a nap, they still developmentally need a nap. Total sleep time in 24 hours for 2 year olds is about 12-14 hours.

Two year olds typically sleep for about 11 hours at night, leaving them well below the 12-14 hour recommended amount of total sleep time if they skip naps.

If you’re experiencing the nap resistance stage that typically strikes as a result of the 2 year old sleep regression, the absolute best thing you can do is to keep offering the nap at a consistent time each day. Typically, fighting naps is just a stage and if offered each day, most 2 year olds will go back to napping soon.

Toddler climbing out of crib

Toddlers get pretty ambitious around 2 and some even have the skills to climb out of bed–rendering nap and night sleep useless. If you have a tot who has recently discovered they can break free it’s not time for a toddler bed (more on this below), but rather time to explore different strategies.

The simplest thing you can do is to put a sleep sack on your toddler. This helps them stay warm and prevents them from having the ability to raise their leg up over the railing. Additionally, remove stuffed animals or blankets giving them that extra height they need to get over the crib rails.

Don’t move to a toddler bed too soon

If you moved your two year old to a toddler bed and then immediately noticed signs of a sleep regression, this is likely the cause for the sleep issues.

Developmentally, most kids aren’t ready to make the switch to a toddler bed until closer to age 3 and some kids are better off waiting until 3 ½ or closer to 4. Even still, once you decided the switch needs to happen, make sure it’s done gradually, as transitioning their sleep environment overnight is a pretty big event in a toddlers life and will cause sleep disturbances if done too quickly.

Try putting your 2 year old back in the crib and see if normal sleep resumes; if it does, it’s too soon to transition them.

Most parents are shocked when a two year old shows signs of separation anxiety, as most of us are trained to think this type of anxiety peaks around 18 months, not 2 years.

When separation anxiety rears its ugly head at bedtime, here are some quick tips to help calm an anxious toddler:

Is a new baby causing the 2 year old sleep regression?

If your toddler’s sleep issues started right around the time you brought a new baby home, it’s likely that your 2 year old is just adjusting to the big life change.

Along with sleep issues, your toddler is likely to act out in a variety of ways when welcoming a new sibling. It’s not uncommon for a toddler to want to be treated like a baby, too.

Help your toddler move past this sleep issue by offering extra attention during the day. It’s likely pretty tough to do this with a new baby, but just 20 minutes of one-on-one time will make them feel like a star. Have dad take the new baby into another room while you go play blocks with your 2 year old.

Another solution to this common issue is to give your 2 year old tasks to help. Have them go get a burp cloth or throw something away in the trash. Include them when you’re doing things with the newborn. Make them feel a part of caring for the new life, not left out, and they’re likely to bounce back quickly.

It’s also wise to start bedtime a bit earlier than normal, as your tot will likely implore a variety of stall tactics in attempt to keep you around longer. Make sure the bedtime routine you’ve established is followed consistently, and while you can offer a few extra cuddles, be firm with your words.

“I love you, you are safe but it’s time to get some rest now,” is really all that’s needed before you shut the door and let them work out their emotions.

The 2 year old sleep regression is very common in toddlers and can quickly be corrected with a consistent sleep schedule and daily routine.